The most efficient way to smoke cannabis? Study says dabs

There are so many different ways to use cannabis. But have you ever wondered what method is most efficient? A new study points to dabbing—suggesting that inhaling heated extract vapor maximizes delivery of cannabis’ active ingredients.

According to the 2019 study from Forensic Science International, dabbing is significantly more efficient at delivering cannabis’ main active ingredient—THC—compared to other inhaled methods like burning a joint or a pipe bowl.

The experiment utilized a machine built in-house which replicated smoking and dabbing, while collecting the smoke and vapor for analysis. The smoke or vapor that would have made its way into the lungs was analyzed for cannabinoid content. Comparing this result with the cannabinoids in the original sample, scientists were able to estimate how much THC and CBD from the original cannabis product would make its way into the consumer’s system.  They called that the “recovery rate”.

While this study points to vast differences between smoking and dabbing, earlier studies found less pronounced results. A 2015 study by Dr. Jeffrey Raber found decent recovery rates for smoking, with a range of 27.5% to 46.3%. While this represents a more optimistic picture for cannabis smokers, it is still significantly lower than the reported 75.5% recovery rate for dabbing.

Dabbing is also different than “vaping”. Dabbers inhale extract that’s boiling off a heated piece of quartz, ceramic, or titanium.

Vapers might be toasting flower in a Pax, or a Volcano, or sipping vapor from the equivalent of an e-cigarette.

While dabbing seems to outperform the other methods at first glance, Dr. Raber argues that dabbing doesn’t always have such high recovery rates. His team performed experiments on dabbing and pipe smoking, along with his research on joints. They found much lower rates of recovery for dabbing—around 40%. His research suggests that dabbing is on par with smoking when it comes to recovery.

Still, he says, “It is certainly possible that you could see high efficiency in terms of recovery via a dab.”

So why would we see such large variation in these studies?

“It seems to primarily be based on temperature,” explains Dr. Raber.

Higher temperatures lead to more combustion, which may destroy or convert active cannabinoids into something else.

In Raber’s experiments, he analyzed not only the smoke and vapor that goes to the lungs, but also the ash, side stream, and the exhaled smoke. Still, they only recovered about 50% of the cannabinoids from the original sample. The other 50% of the cannabinoids seemed to be destroyed or converted into something else. So, the new study may have used a lower temperature to dab, reducing combustion.

While combustion seems to be the culprit for smoking’s low numbers, we simply can’t assume that these cannabinoids just ‘go up in smoke’. After all, smoking joints has a strong effect that feels quite different from vaping or dabbing.

“It is quite possible other molecules that form during combustion, which are absent in vaporization, are leading to some of those experienced physiological effects,” explains Dr. Raber. Unfortunately, it would be very difficult to determine specifically what that molecule might be.

Another important factor in the varying rates is the composition of the extracts used.

“We did observe differences depending on concentrate composition,” recounts Dr. Raber about his own study.

Raber’s study used extract rich in THC, while the new study used the natural “acid” form of THC — called “THCA” — that you’ll find on the fresh plant. The difference is important.

It may be that dabbing with THCA extracts offers a particularly efficient way to consume THC.

High-THCA extracts have become increasingly available in recent years, but they aren’t the standard when it comes to dabbing.

Is dabbing really more efficient overall? Or is it about low-temp dabbing with THCA to max out recovery rates? More research is needed to fully understand this picture. 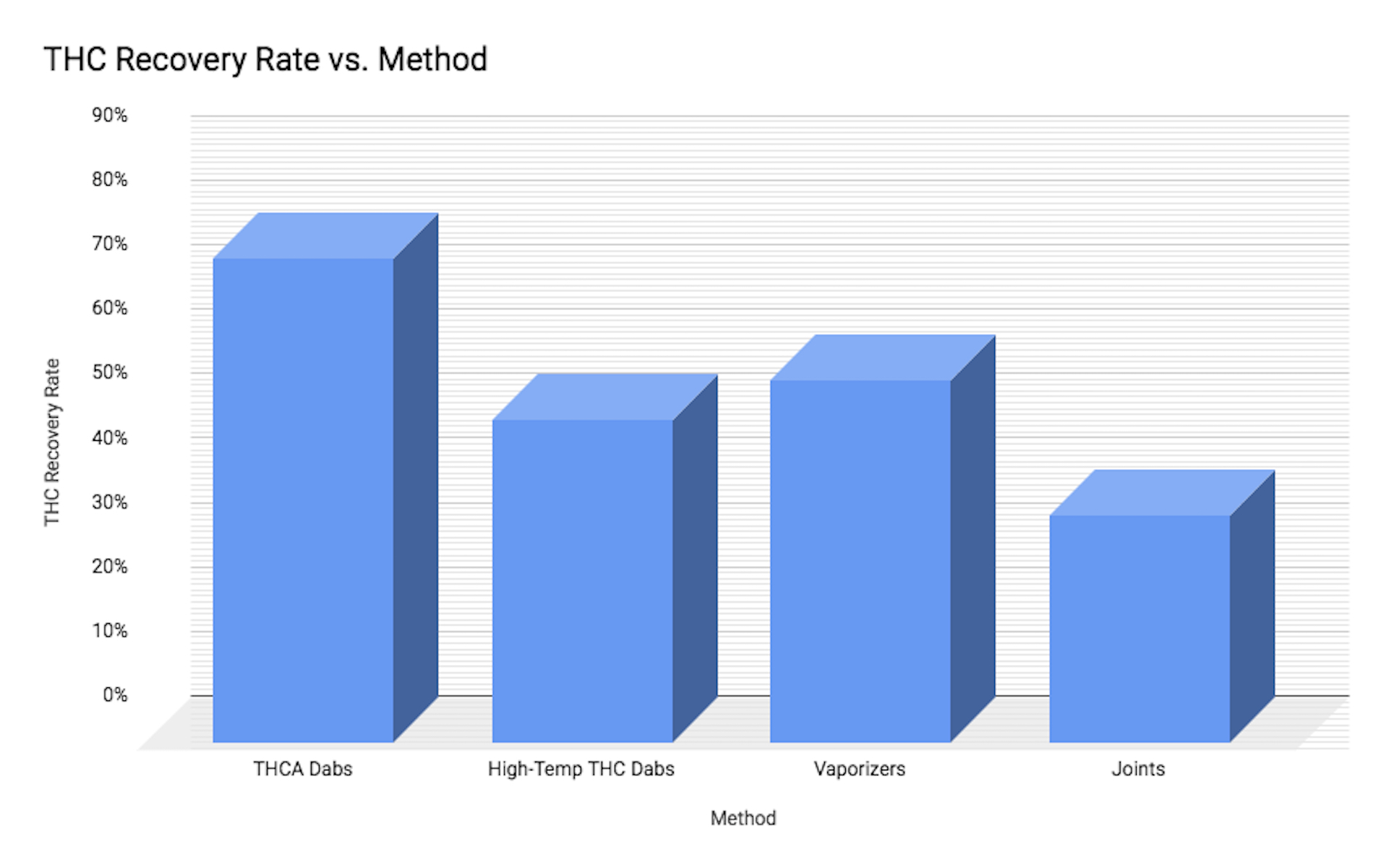 OG Face-Off: Dabs and vapes might beat joints for efficiency. Note: rates can vary by device, method and chemistry
Sources: ‘A preliminary investigation of lung availability of cannabinoids by smoking marijuana or dabbing BHO and decarboxylation rate of THC- and CBD-acids’, Forensic Science International, Feb. 2019; ‘The Conversion and Transfer of Cannabinoids from Cannabis to Smoke Stream in Cigarettes’, Natural Products Chemistry & Research, Jan. 2015; ‘Medicinal Cannabis: In Vitro Validation of Vaporizers for the Smoke-Free Inhalation of Cannabis’ PLoS One. 2016